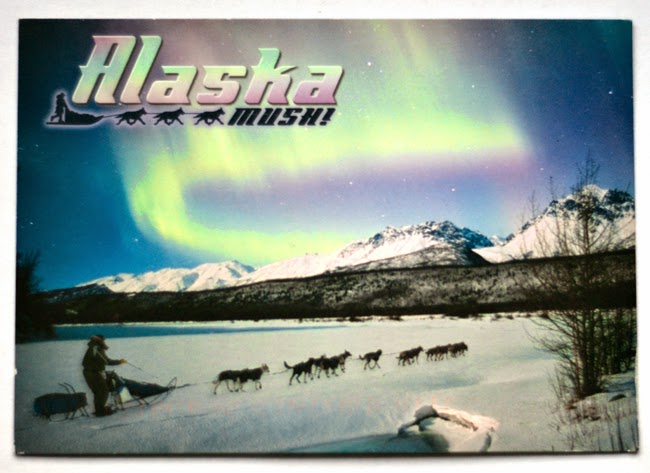 Alaska is a U.S. state situated in the northwest extremity of the North American continent. Bordering the state to the east is Yukon, a Canadian territory, and the Canadian province of British Columbia, the Arctic Ocean to the north, and the Pacific Ocean to the west and south, with Russia (specifically, Chukotka Autonomous Okrug and Kamchatka Krai) further west across the Bering Strait.
Alaska is the largest state in the United States by area, the 4th least populous and the least densely populated of the 50 United States. Approximately half of Alaska's 731,449 residents live within the Anchorage metropolitan area. Alaska's economy is dominated by the oil, natural gas, and fishing industries, resources which it has in abundance. Tourism is also a significant part of the economy.

Although it had been occupied for thousands of years by indigenous peoples, from the 18th century onward, European powers considered the territory of Alaska ripe for exploitation. The United States purchased Alaska from Russia on March 30, 1867, for $7.2 million ($121 million adjusted for inflation) at approximately two cents per acre ($4.74/km²). The area went through several administrative changes before becoming organized as a territory on May 11, 1912. It was admitted as the 49th state of the U.S. on January 3, 1959.
Autor: dorotakalicinska o 19:49 Brak komentarzy: 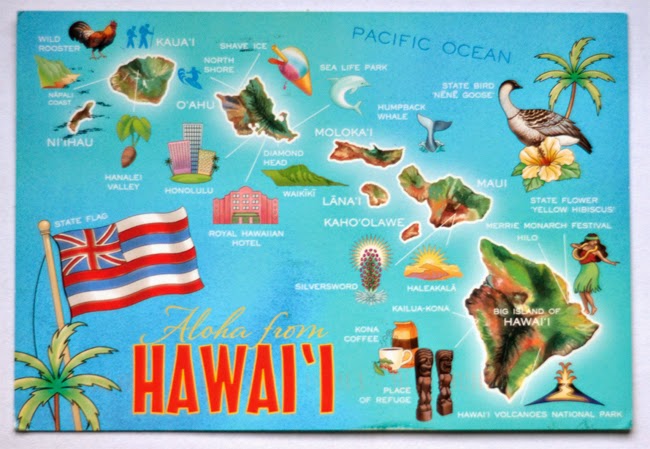 Hawaii  is the most recent of the 50 U.S. states and joined the Union on August 21, 1959. It is the only U.S. state located in Oceania and the only one made up entirely of islands. It is the northernmost island group in Polynesia, occupying most of an archipelago in the central Pacific Ocean.

Hawaii’s diverse natural scenery, warm tropical climate, abundance of public beaches, oceanic surroundings, and active volcanoes make it a popular destination for tourists, (wind) surfers, biologists, and volcanologists alike. Due to its mid-Pacific location, Hawaii has many North American and Asian influences along with its own vibrant native culture. Hawaii has over a million permanent residents along with many visitors and U.S. military personnel. Its capital is Honolulu on the island of Oahu.
Autor: dorotakalicinska o 19:41 Brak komentarzy: 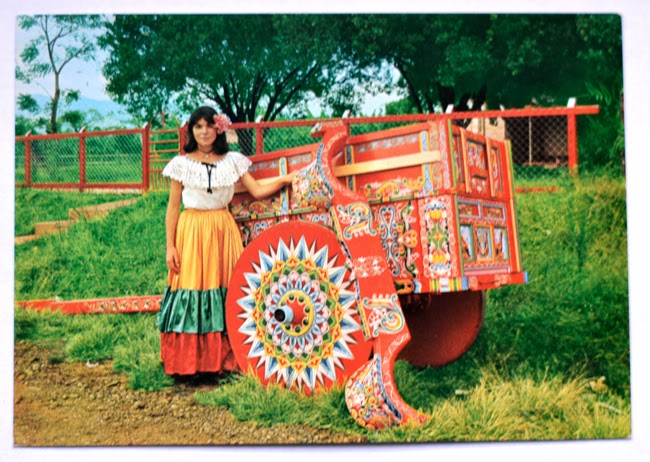 The traditional oxcart, or carreta, is Costa Rica’s most famous type of craft. From the mid-nineteenth century, oxcarts were used to transport coffee beans from Costa Rica’s central valley over the mountains to Puntarenas on the Pacific coast, a journey requiring ten to fifteen days. The oxcarts used spokeless wheels, a hybrid between the disc used by the Aztec and the spoked wheel introduced by the Spanish, to cut through the mud without becoming bogged down. In many cases, oxcarts were a family's only means of transport and often served as a symbol of social status.

The tradition of painting and decorating oxcarts started in the early twentieth century. Originally, each region of Costa Rica had its own particular design, enabling the identification of the driver’s origin by the painted patterns on the wheels. By the beginning of the twentieth century, flowers, faces and even miniature landscapes appeared beside patterns of pointed stars. Annual contests were arranged to reward the most creative artists and are still held today.

Each oxcart is designed to make its own ‘song’, a unique chime produced by a metal ring striking the hubnut of the wheel as the cart bumped along. Once the oxcart had become a source of individual pride, greater care was taken in their construction, and the best-quality woods were selected to make the best sounds.

Today's colourful and richly decorated carretas bear little resemblance to the original rough-hewn, rectangular, cane-framed vehicles covered by rawhide tarps. In most regions of Costa Rica, trucks and trains replaced oxcarts as the main means of transport, but they remain strong symbols of Costa Rican former country life, and the carretas still feature prominently in parades and in religious and secular celebrations.
As most oxcarts became obsolete as means of transport, they have been reduced to decorative craft objects. Due to the decreasing demand for oxcarts, the number of artisans who possess the training to manufacture and decorate oxcarts has rapidly declined over the past decades. Therefore, only a few of the younger artisans are interested to learn and practice this craft tradition today.
Autor: dorotakalicinska o 19:19 1 komentarz: 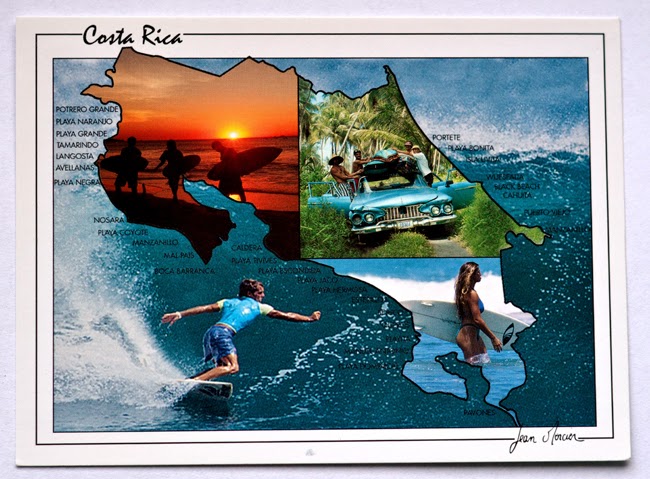 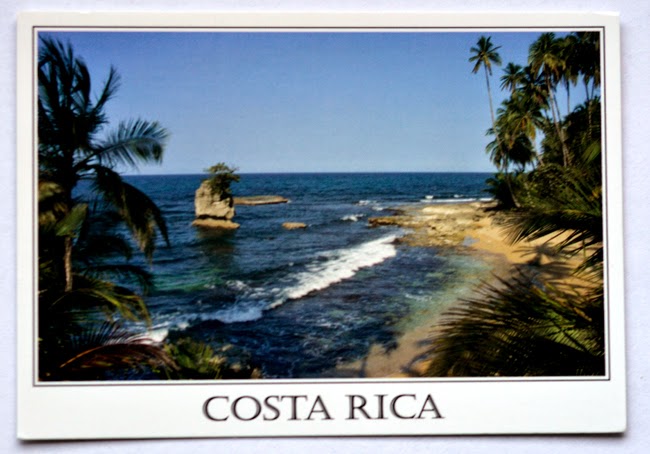 The beach hamlet of Mazanillo, actually located within the park, is home to some of the finest white-sand beaches that the Caribbean side has to offer. From the town, several trails make their way up to Mona Point 6 miles (10 km) away, beyond which lies the only red mangrove swamp on Costa Rica's Atlantic coast. Equally rare are the two palm swamps found inside the park that protect tapirs within the stagnant forest.

The tropical vegetation and remote location draw a plethora of tropical birds to the park-more than 360 species-including the elusive harpy eagle. This large population certainly makes for good birding.

Marine turtles-leatherback, hawksbill, and green sea-frequently nest on the park's southern beaches. Although not a primary nesting site for turtles mainly due to human activity, conservation efforts have been stepped up in recent years by community members to try to increase the local populations.

Much of the KeKöLdi Indian Reserve spills into Gandoca-Manzanillo to safeguard indigenous Bribri and Cabecar tribal land. Indigenous tribes inhabit sections of the park, subsisting off the forest and experimenting with ecotourism.

A wide variety of fauna inhabits the park such as manatees, dolphins, Venus sea fans, and eagles. Snorkeling and scuba diving offers intimate views of tropical fish that weave in and out of the living coral.

The best time to visit Gandoca-Manzanillo is during the dry season, March through April and from September to October, as the park receives plenty of rainfall. Both Manzanillo and Gandoca provide access to the park. Accommodations at these hamlets are sparse. Nearby Puerto Viejo is the best option for those looking to spend at least a few days in the region.
Autor: dorotakalicinska o 19:12 Brak komentarzy: 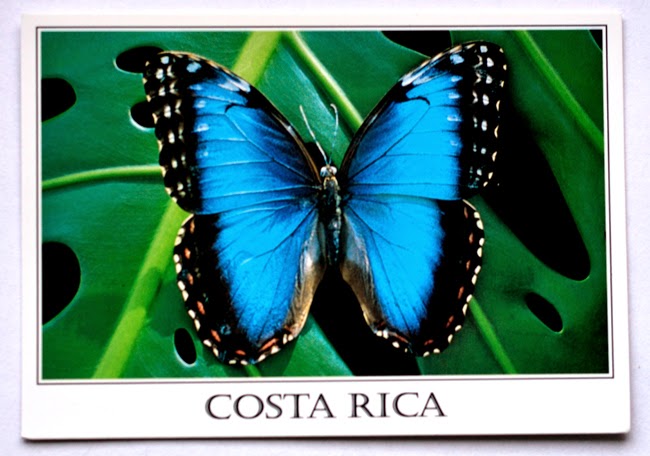 The brilliant blue color in the butterfly's wings is caused by the diffraction of the light from millions of tiny scales on its wings. It uses this to frighten away predators, by flashing its wings rapidly. The wingspan of the Blue Morpho butterfly ranges from 7.5–20 cm (3.0–7.9 in). The entire Blue Morpho butterfly lifecycle, from egg to adult is only 115 days.

Morpho peleides drinks the juices from rotting fruits for food. Its favourites in captivity are mango, kiwi, and lychee.
Autor: dorotakalicinska o 19:07 1 komentarz: 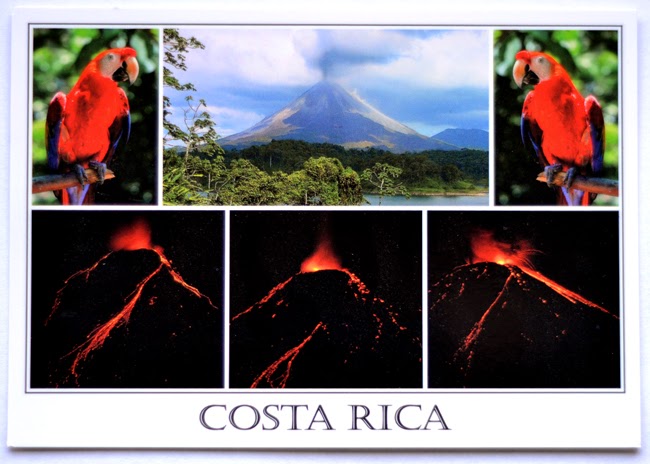 I'm terrible person if it comes to blogging regularly ;) I'm reminding myself about my postcards blog three times a year and then I'm adding tons of cards at once - I will say that once again: I'll try to do this more often ;)

Costa Rica (meaning "rich coast" in Spanish), officially the Republic of Costa Rica (Spanish: Costa Rica or República de Costa Rica), is a country in Central America, bordered by Nicaragua to the north, Panama to the southeast, the Pacific Ocean to the west, the Caribbean Sea to the east, and Ecuador to the south of Cocos Island.

Costa Rica was sparsely inhabited by indigenous people before it came under Spanish rule in the 16th century. Once a backwater colony, since attaining independence in the 19th century, Costa Rica has become one of the most stable, prosperous, and progressive nations in Latin America. It permanently abolished its army in 1949, becoming the first of a few sovereign nations without a standing army.Costa Rica has consistently been among the top-ranking Latin American countries in the Human Development Index (HDI), placing 62nd in the world as of 2012. 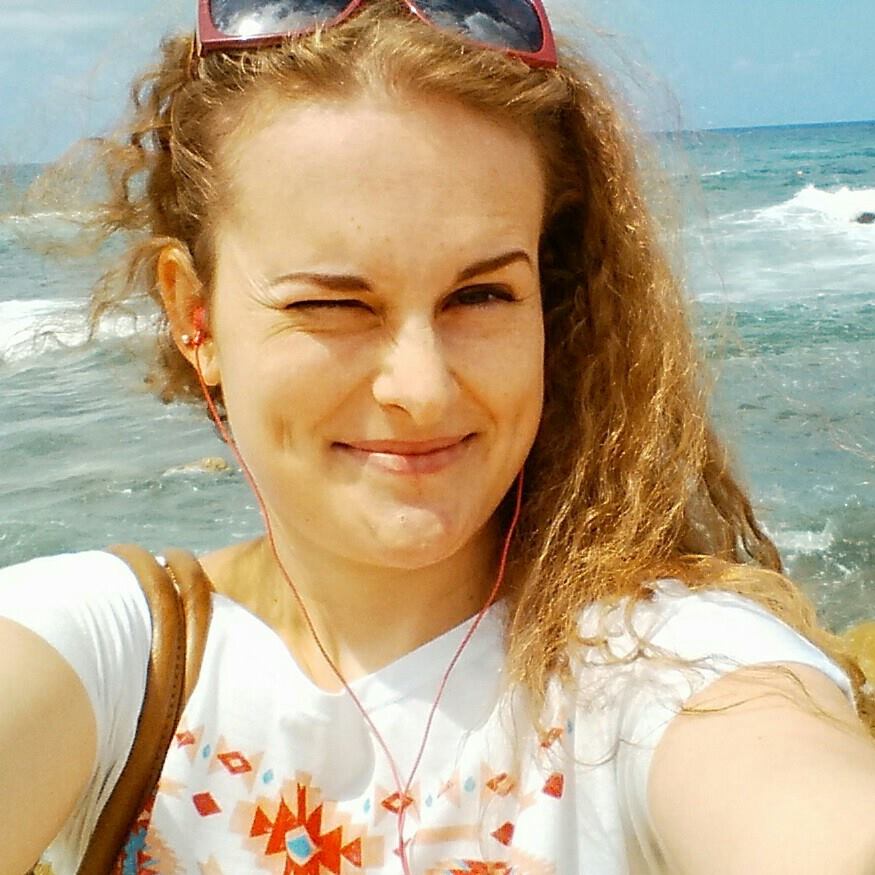 Dreamer.
Loves travels and postcards because they are substitute of constant travelling.
Polish.
Lately moved to beautiful island of Cyprus.
Jewelry designer.